I love to learn and challenge myself and game dev is the perfect hobby for that.

You can find my dev videos at www.youtube.com/ztuu

I missed AKJ 7 so I'm hoping to find time to make something for this jam :D

I've never made a 3D game for a jam so I'm aiming to do something 3D so I can practice my blender skills!

Hey everyone, for this jam I made a local 2P game.
Because of that some people can't play it! :(

If you have a friend(or 4 arms) please consider coming over and checking out manaball!
I genuinely think the game is really fun, we had a blast playtesting it and would love your feedback.

Well done guys! 57 games and counting, can't wait to try them out!
If you managed to get a game done then give yourself a pat on the back and high-five your team(if you had one).

It's that time again boys! Really looking forward to taking part in this awesome community again.
Can't wait to play everyone's games, let's do this!

Can I submit something I started early? 2 0

So I really wanted to take part in this jam but I've just been way too busy.
The thing is I started working on a game that fits the hyper casual bill around xmas last year and I'm just finishing it now?

Is it cool if I submit it unranked? Would love to take part but I've just not had time to work on a whole new project as well as everything else.

This is a really interesting one! Gonna have to shift gear in my brain and try and design something with different goals than I usually have!

This should be fun, going to try and push myself to build this for mobile because I've never made a mobile game. Probably just Android because that's what I own. Mobile is perfect for the hyper casual genre so we'll see how it goes.
No ideas yet so I better get brainstorming, good luck everyone!

So far with 12 ratings not one person has submitted a score for my game!

Scores are in the form of time taken to complete the game. so does this mean no one has completed it?
Fall for someone is a platformer inspired by games like super meat boy. I deliberately increased the difficulty a little bit from how I usually make games to make this one a challenge but it's not THAT hard!
Frequent checkpoints and instant respawns mean you can just keep going and going!

Josh McLean did manage to complete it on his stream so I've seen at least one person do it.

Come on guys, show me your best! I wanna see some scores on that leaderboard before the jam is done!

I took part in Alakajam #3 so looking forward to this!

I'll most likely be using Unity2D with C#, pixel art software like graphicsgale amd beepbox.co for some chippy music.

However I've been learning blender recently so I'm tempted to push myself to try something 3D. I'd probably sacrifice having a game that isn't as good but be learning a lot more in the process.

I guess I'll decide when the theme is released!

The 5th Kajam is over, the long awaited results are in, and sadly I must graciously accept the honour of last place. It may not be your first impression to think of it as an honour, but just as every cloud has a silver lining even last place is itself a prize dependant on how you look at it.
By coming in last I therefore made the most mistakes, and by making the most mistakes I then have the most to learn and gain from taking part in this Kajam. I'm going to attempt to reflect on my own submission and work out what I could have done better. If you have any further constructive feedback I'd love to hear it.

I would like to quickly take this opportunity to thank every single person who played, rated and provided feedback on Street Bots. I appreciate every one of you.

Issue 1 - Inspiration: I chose to make a retro game inspired by Pokémon, a high standard to set the bar by. I did so because I love Pokémon and I've never made an adventure rpg so I wanted to challenge myself. An important step I missed was to look at what gave Pokémon its spark, why people loved the games and what drew them in. I think a big part of Pokémon is the depth of the world; the spreading map that you gradually explore, the chance to encounter new creatues in each place, growing your team and forming an attachment to them over time as they help you overcome various challenges. I dont think a lot of these features translate well to a smaller, shorter game which is of course what I would be making when taking part in a timed event (and starting 3 weeks late!).

Issue 2 - Flare (or lack thereof): Not being an artist this is probably something I am often guilty of. A game doesnt have to be flashy to be good but the lifeless, unanimated battles of Street Bots certainly didnt add to the immersion. The battles lacked both SFX and animation and I think this detracted from the "fall in love factor" which can draw people into games. Another example would be the player movement. I struggled at first to get the movement to feel how I wanted and decided to opt for the "good enough" approach and move on. This was a mistake because movement was such a huge part of the game. The first thing you do is move, the majority of time playing the game is probably spent moving around. I tested the game many many times and got used to the clunky movement, however to someone just downloading and trying the game the awkwardness would detract heavily from the rest of the experience.

Issue 3 - Scope: The game was just too much for me to handle in only just over a week. Add in that I got suddenly sick and didn't do any dev for 2 or 3 days and there's just not enough time. If I'd had the time I would've added a lot more to some of the existing mechanics; multiple bot battles using teams, some sort of effectiveness system in battles,  a mechanic similar to wild Pokémon for training your bots and full keyboard controls! No more cheap UI and mouse elements. Some of these features could've added more variety and life to the game. In it's current state it feels linear and stale.

Despite the bad things I've said about it I'm very proud of Street Bots. I love the game and learned a lot from creating it.
If you've actually read this entire post then thank you for reading my internal monologue brain dump. I hope you too can learn something from it.
Another huge thanks to everyone who played Street Bots, everyone who took part in Kajam 5 and the fantastic organisers of Alakajam. I look forward to the next one!

Decided to jump in at the last minute! 2 2

They do say better late than never!

I wasn't planning on entering this Kajam but I've had a sudden change of heart and an idea.
Hopefully I can get something together in time that's decent enough to get people's interest.

All I have so far is a simple character but it's good to get the ball rolling.

Good luck to everyone else taking part and especially to those latecomers in the same situation as me! 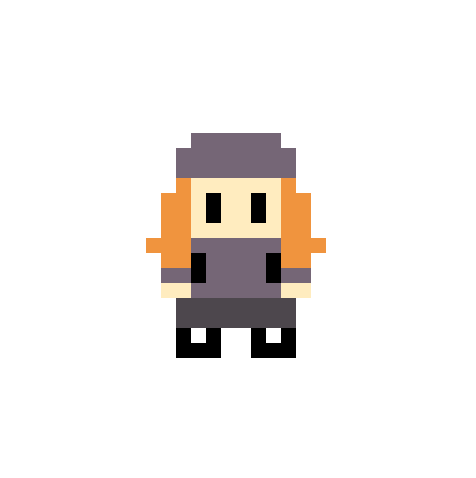