The GPU skinning I've been working on is going well—but not that well. I decided a couple of days ago that I need to prioritise finishing something for the Kajam, and then continue working on the OpenGL stuff. So I've started working on a new game in Phaser, but trying to reuse as much as possible from the other game (mostly the artwork).

I re-rendered the model from before, and did some tidying up in GIMP to produce this instead: 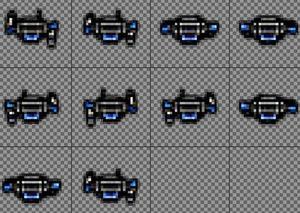 I'm about to embark on coding the animation stuff; but first I needed a nice animation to test it out with, so here it is. Originally I was animating the arms too, but it seems to look more (or less, perhaps?) natural this way; it's a robot, after all :D

I expect that adding animations to the game will take a couple of days, but once it's done the sky is the limit for the graphics in this game!

I got my model loading working today. It's been a bit of work but my OpenGL understanding has increased massively. I've also learned what happens if you specify the wrong image format ^^ 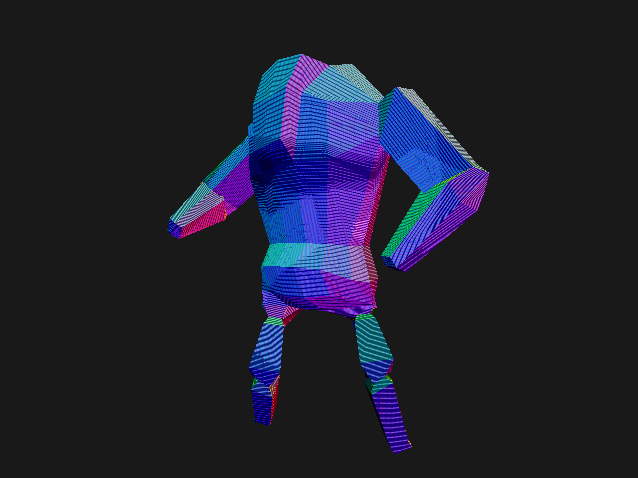 I'd like to make something top-down and tinker with some adversarial AI. I've been hacking around with OpenGL quite a lot in recent weeks, and would love to turn my delicious spaghetti codebase into a game for this jam. Time might be a little tight as it's very rough and incomplete, so if that fails, my back-up plan is to use Old Faithful and whip something up in JS.

Would also be nice to turn my abysmal 1/3 attendance record into a pitiful 2/4. We'll see!

Rise of the robots

Improvise, adapt, and overcome! Or at least, tell a computer how to do that. Yes, the 4th Kajam's theme is Artificial Intelligence.

AI has been used in games since at least the early '70s, becoming more popular with classics like Space Invaders (1978) and Pac-Man (1980). Genres —like RTS and FPS—from the '90s brought the development of AI in games to a new level, and with more recent titles like the Half-Life episodes we started to see quite convincing cooperative AI.

Your mission—should you choose to accept it—is to create a game using AI in some way. It doesn't have to be particularly complicated: if you're stuck for ideas, try tweaking your path-finding algorithms; creating a novel NPC; or just making a really hard-to-beat opponent. If that doesn't suit you, other takes on the theme are very welcome too! (Edit: In particular if you'd rather make a game where the player has to write the AI, that's also fine!)

So the 2nd Kajam is over, and I'm very happy with the result (and we won, sort of)!

This was a very busy month for me, but fortunately I was working with some very talented individuals. They deserve most of the credit as I only managed to push a small amount of code and a couple of level designs.

I think the game is pretty fun, despite the simple gameplay. The music & SFX are great (albeit lodged in my head forever), and everything fits together nicely. There are also some brilliant touches which I would never have thought of myself, like the cat, which give the game character.

Given more time, I think we could have benefited from adding some hazardous items (e.g. spikes) for more varied gameplay, and perhaps some animations for the player in particular. But then, the lack of animation works quite well with the retro theme, and the game doesn't really feel like it's lacking. More probably we just chose a very realistic set of features for a game jam, and executed them quite well.

I learned a few things from working with wan, too: how useful a design document can be; how to pick a simple idea and do a good job (I quite often fail to complete something because it's too complicated); and how to drive something through to completion.

Overall I'm chuffed with the result and proud to have been involved :D

Managed to squeeze this in, just in time! I made it for MiniLD 74 (The Coop Jam), using music by @wan. It's a 1-4 player asteroids game with slightly crumbly sound effects. Enjoy! :)