Air Force One has crashed while traveling through the Bermuda Triangle. The President is among the survivors, who must escort him through an unknown island. Will they be able to reach the radio station? Sacrifices will have to be made…

This game was made over 3 days for Ludum Dare 43.

I think the trickiest part of the entry was how to present the game rules effectively. We didn't have the time to do everything we wanted for teaching the game to new players, but we're curious how much of a problem it actually is for enjoying the game. 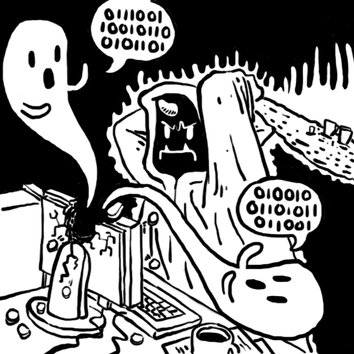 The cycle of each day is slightly unclear. It seemed like a cycle of: choose action, choose party members, choose target tile. But the last actions of the day skipped the target tile choice, is the cycle different or is that just how the day ends? It also seemed like the Rest action was always mandatory, that could be something automatic then to mark the start/end of the day instead of having to choose it from the action list. It did seem like the hidden occupants of each tile were the same between actions/days, so adding an icon to represent occupants once a tile had been visited or explored would be helpful if you plan on building this out more.

Victory!
So this seems like a cool game. I like the art, the map is really cool. The music at the start was cool but it seemed to stop part way through the game.
I didn't really understand the purpose of the character roles. Maybe if you developed it further choosing who to feed and who to starve would be better rather than it happening in order. For every action I was sending my first 5 guys because they were the 5 highest stamina and sanity. Also I never seemed to have enough food each day. Not saying thats a bad thing it shouldn't be too easy and I think I only lost 1 or 2 guys, I just wasn't sure if I was doing it right.
Little spelling mistake "loose sanity" should be "lose sanity".

I agree that getting the rules across is the challenging part. I found the game pretty intuitive to be honest but I play a lot of games so it may not be the same for more casual people. I'm also not sure I was really playing in an optimal way I was just working it out as I went and then it was over.
The format is good though, I enjoyed playing it and I'm impressed you made it in 3 days for LD. Well done!

This is a nice one! It strongly remembered me of "Curious Expedition" (which I really enjoyed playing :D).
You set a nice mood with dark-ish colors, the rain and the laid back music. Good job here.

I would like to give three points to improve on: One is gameplay: While the game wasn't super hard to win, I would have loved to see some of my decisions evolve. For example when leaving people behind in villages it would be nice to lowering the moral of all of your remaining folks or making them afraid of visiting another village. When having wounded people in your team it would be an interesting mechanic to reduce the movement speed of the whole group.

The second point is visualization of information. I personally found it hard to judge what was relevant. There are a lot of great ideas and I know it is a jam game, so time is definitely limited. Visualize the information more clearly. If a person is wounded, give a short tooltip or display the health/stamina bar directly on the image.
It would also be nice to get information for already explored spaces (showing what the player found there).
I also did not notive there are three times a day (only noticed in the second playthrough) and it still is not clear to me, if there is a difference (like is it beneficial to explore in the morning and look for food in the evening or should I try to move my group not at lunchtime, because it is too hot then or …. ). Also I did not quite get how and when (why?) to rest and when a day ends (the fade to black time could also be lowered.) Do I get any bonus when resting in a cave or deserted camp? Can I find more food in deserted camps or in jungles, …? It could also be a nice idea to show an "estimate" on the success chance of an action (like crossing a river, finding food, …) so the players can make their decisions based on a well informed state. As I said before: there is a lot of things going on, but I would really like to see that communicated in a clearer way.

The third point would be the visual effects. While the hex tiles are quite nice, the text boxes would surely benefit from a visual overhaul. Starting from fade in / fade out animations, a more responsive feel (e.g. a sound when hovering over the buttons). Some visual effects when fading in new tiles would also be nice.

All in all congratulations on this game. Creating a game of this scope in just three days is not an easy task, so good job here!

Very original game! I had fun getting mauled by bears, crocodiles, natives and plenty of other dangers! I like how you can explore areas before you move there - or you can just go blindly. It wasn't completely obvious to me how many actions per day you have or how much food you need - perhaps a quick walkthrough of all these things in the beginning would have been useful.

Of course, on replays I get better at finding a solution. Although I did notice there is a little bit of random on the tiles (such as whether you can get through the thick jungle), it would have been cool to have the map slightly random each playthrough. It doesn't have to be completely random, perhaps 3-4 different locations for each main event? Just so you can't brute force it.

I appreciate all the details, such as different roles and stats, picking who to send on missions, and all the choices about what to do with the various events. I really like that the game starts right off with a choice between life and food! Brutal!

I think this has great potential, and could see a slightly-randomised version with multiple (or generated) maps and potentially a wider array of events being excellent - something like Curious Expedition :)

update: after reading other comments, just want to add that it would be great to add tooltips/visual indicators on the tiles you've visited - or even just explored! E.g. a village when you discover it - or a crocodile so you know not to go back there!

We already talked about ti for a while but there I go:

Art: Well, thats beautifully rendered. A bit not memorable, but a lot of asset quality and variety. actual board game prototypes are usually worse looking than this :D

Music: For a game about thinking and so slow paced, might be a bit too thumpy, but the music itself is good. i get you wanted to get the "action movie" feel, and it really does, but having it all the tima kidna diminishes it.

Gameplay: Well, this is a good board game I'm pretty sure. And with most board games, I dont even know what I'm doing most of the time. The great advantage of bringing a board game to computer is that you can make "tha player making rules mistakes" abolsutely impossible, and that's nice, but the computer medius shoudl also help the player to udnerstand goals, resources and structure/options in a more visual way than just having a number or some coins in a table, and you haven't really taken full advantage of that.
I think the worst two "hidden" stuff were the turn/day structure, and having a clear goal or something. Also, I'd just show the dice in a comprehensive way, like choosing characters for a task would be literally choosing dice for that roll and you would see the target value you need to reach.

Final thoughts: I Can see myself enjoying both playing or understanding the design of a game like this, if it was a bit more approachable. I feel like youve hidden so many awesome systems (the dice and all) under the hood that you kidna abandoned the player experience a bit, and in the end, the player only sees what you show them.

A lot of work was certainly put into this, but board games and heavy UI games require a lot of playtesting and thats impossible in a jam. I'm sure with some you coudl make somethign real great.

The scout/explore to a unknown location while attempting to keep the party alive is good. I started with no food/supplies and randomly clicked about haphazardly but managed to find the radio tower.

I found a lot of confusions, some cleared up quite quickly, like the first day rest changing to a new day took until mid-day 2 to figure out the 4 turns a day. The stats per character / group were easy to find and understand, although I did not understand how to regain sanity, and/or what caused sanity to be reduced. I did figure that stamina was reduced by assigning actions and increased when the character ate food. It also took a while to understand that 3 food only fed 3 characters.

I had the poorest of luck finding food, and did better by "moving" when using the "directions" action. It wasn't very clear how I was moving otherwise since the Explore action did not allow movement, and how to rest except when forced to rest. Without some of the explainations Wan gave in chat I probably would have failed to gather other things as well.

The art was solid for a game jam, it has a good amount of variety and different peices to the map, characters etc. I do have a feeling that for a releasable game the art quality would need to go up, but I have no real evidence or know how it could improve.

It was cool to exchange lengthier reviews than usual with y'all, enjoyed this event more than I expected :)

@Wan Yeah this was definitely an awesome event. Got some really valuable and helfpful experience and played some great games!