Raycast is used for aiming still

get yourself a time highscore

As a mage, the FBI does not like your existance and decided to destroy you.

Drive away. Defend yourself, and try to escape. Although deep down you know the FBI is too powerful.

To cast spells, you need to use certain hands signs. To do that, close as many fingers as you'd like. The spell combinaison is based on the finger color, not the finger. The same five colors are found in each game but the finger which uses that color gets randomized everytime. The spells combinaisons are the same each game.The spell will be casted when you release the last of the finger buttons you pressed, as long as you have enough mana.. Recover mana by driving as fast as you can.But be careful, not all spells are beneficial.

Loved the mechanic of casting. Good feel on the combinations and even without much clue, you can figure most of the magic on the first run and get prepared for the next one.

I probably didn't get all the possible combinations but having to figure that out its one of the good parts of the game.
A nitpick on the driving cop cars that can hit you easily if you're not prepared on first time.

The logo really had me laughing. The spalshscreen is really beautifull. Ingame the graphics weren't too amazing, but okay. The police cars had a visual glitch where they could appear completly in black.

I like the idea of mechanics, though the randomization of colors on your fingers always took me a few seconds to find my favorite spells.

Sometimes I had phases where I just died without even knowing why and sometimes I could try around for 20 seconds without spotting and police car.

I don't know why, but SteamVR kept starting when I played your game.

All in all, its a originial and interesting take on the theme, but I think the ingame graphics and gameplay could need some polishing.

Good game overall, even if for me a better control scheme would have improved the experience, something like 1,2,3,4 button number one for each finger! :)

Hard to get going at the start, and the randomizing fingers made learning the spells hard as there isn't time at the start of level to get used to the new arrangement. I was also able to drive off the world and get infinite time. I like the concept of doing something while driving, reminds me a bit of zombie highway. 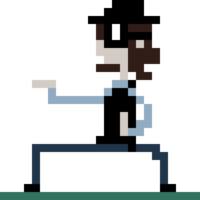