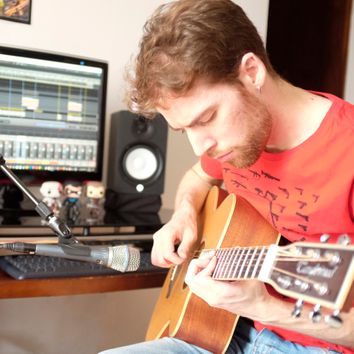 Thiago Schiefer is a Toronto-based composer, sound designer and songwriter. Mainly focused on game music scoring and sound designing since 2014, before relocating to Canada he was an in-house sound designer at Papprika by Tapps Games – one of the biggest mobile games companies in Brazil, with over 400 games released. He has also provided the music, sound effects and voice over for indie games such as Eliosi’s Hunt (TDZ Games) and Drop Dead Twice (Nownew Games, 2016), as well as VR experiences such as Sunken (Tapps VR) and Apoema VR (TDZ Games).

Also a singer-songwriter, he has released the albums Prototype: Freedom (2013) and Living Room Sessions (2015). The first is a heavy rock-oriented album, produced and recorded by Fabio Ribeiro (Remove Silence, ex-Angra, ex-Shaaman) and Ale Souza (Remove Silence) at The Brainless Brothers studio, with special guests such as Hugo Mariutti (Shaaman, Andre Matos), Daniella Alcarpe, Rodrigo Calejon and the producers themselves. The second is an experimental endeavour ranging from purely acoustic to heavily electronic songs (and a lot in between).

In the educational field, Thiago also maintains a music theory course focused on composing skills and a blog/YouTube Channel at academiadecomposicao.com (in Portuguese).