Work your way up from small compounds all the way to Gold by transmuting elements together!
Hermit To Gold
by Volvary
on 1st Alakajam!
Solo

First thing I have to say before anything, holy hell, I need to step up my Jam naming game. I never seem to find good names for my games.

Now that this is out of the way, let's start this post-mortem.

Since I wasn't sure if I would have my entire weekend to do the jam, I decided to avoid leaving others in a pickle if I left. In the end, that was a good move as I had a lot of movement during the weekend.

While my past experience with solo jamming had been poor (couldn't keep going the second day), I was scared I would come out of the jam with an incomplete pile of code that could not be played. But I pulled through. Morning of Day 2 was hard to get into but I found the force to start and everything went without a stop until late into the night.

The aim of my game was to hit on that "mad alchemist, trying to create ressources from scratch" vibe and I think it's easy to see how. Although, as some comments on the game pointed out…

[…] I do feel it turned into a bit of a "try mixing all different combos one by one until I discover something". […]

Lack of time did make me go very simplistic on the recipe system. And that is one of the things I am planning on fixing. In further Jams, I will need to shrink my concept even more when working alone. In retrospect, cutting the "Onion Farming" part and replacing it with a slowly increasing gold would have given me enough time to flesh out the research system or work further on the story of the game as the second part of the comment above mentionned.

[…] Didn't feel like there was a direction for me to go in, or any risk, or real incentive to play.

As another comment pointed out, I did skimp very much on the story in my rush to get a lot of systems in.

[…] Having no tips and just trying to mix counted component is a little harsh.

In the future jams, my focuses will probably be player attraction (through story or tutorial) as well as cutting down on mechanics to make them better.

[…] Only thing I felt missing is the graphics that you could have added! No Sounds still works! But missing graphics give a emptiness feel. […]

Being alone and not being that good of an artist, I left the game very basic looking. Looking at the game in my editor and fiddling with stuff, I think I understood why it was so weird to some. Removing the cauldron, which I made hastily, looks a lot more natural, especially for any veteran of A Dark Room or similar game.

[…] Perhaps the UI could be improved - I was already getting frustrated at scrolling up and down the list. Maybe I'm not just cut out for alchemy? […]

Another comment I got a lot regarded the Interface and how tedious it became after a while. I have been compiling the comments and will have to do a lot of Quality of Life upgrade before I even accept to present the game HtG will become for another full test. Good thing at least is that the UI upgrades are my main concern at the moment.

From scrolling through an ever-growing list of ressources, to clicking through each and every component of a complex recipe (Pyritic Acid being made of 49 basic elements as one of the commenters pointed out), I have a lot to fix.

…or, in an alternate interpretation, I just spent several hours of my weekend, filling out the blanks in an Excel-sheet listing fictional materials, with 90% of that time being spent on repeating actions I'd already performed multiple times before :-) […]

One of the things I have always been having trouble with (be it video game making, D&D campaigns, etc.) is correctly aligning both pendulum to be centered at the same time. And it seems this time I have let both go far out of sync. As the comment shows, the game can take multiple hours (of repeated actions at this point) to complete, which is far over what you should have in a game jam. I will let another part of the same comment speak as far as difficulty.

[…] Out of these 231 combinations, only 23 are meaningful, i.e. moves the research forward by either discovering a new element, or by winning the game. Also, when an attempt is made, the materials are usually lost. And finally, losing an advanced element means that you have to spend time on rebuilding that element from more basic elements (using processes you have already discovered and followed previously), just to get back to the point where you can continue your research from the point where you left off.

As the game progress and becomes more and more complex, I will be very careful of monitoring both pendulums more accurately. (and a little bird tells me I will most likely need to add some tools in-game for me to analyze some sample playthroughs to understand where the game hitches)

As the game stands right now, I will have two things ahead of me: Improving and Progressing. As such, I will do some progression early but most of the early work will clearly be improvements. Most of those come from the comments I received.

Currently on my shortlist of things to fix:

Looking for Feedback to continue Hermit To Gold post-Jam. 1 0

I am looking forward to continuing Hermit To Gold post-Jam and would like some comments on it. I will be writing a full Post-jam-mortem later this week but until then, I would very much like a bit more feedback on the current state of the game and where I should focus first.

Thanks a lot to everyone who sends me feedback. (Anonymous feedback is on if you need.)

As I know how much package can screw you over, I am starting to package right now, to see how it performs. There is still a few things I need to finish but they can wait as they are simple modifications to code I have already written.

Amongst the modifications left, I have the Title Screen and a modification to the inventory to do and I'm done. The rest of the time will be used on polishing what already exists, with frequent backups in case.

Good luck to everyone to finish and I'll see you all across the finish line. We all deserve it. 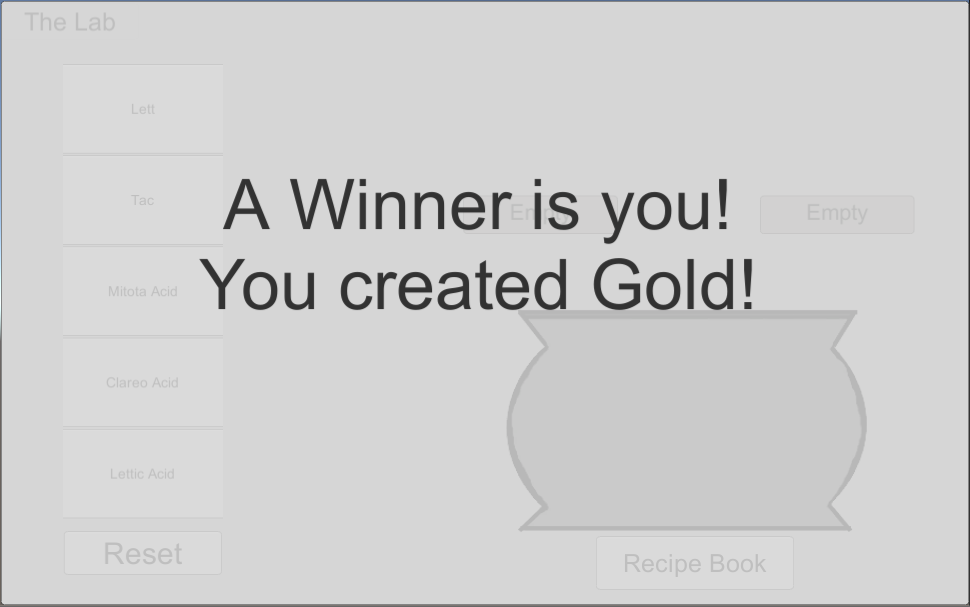 So, very little visual progress since this morning (except for the menu here shown underneath) but I have made very good progress on the recipes used to progress in the game. A lot of those recipes have been put into the game and you can now buy materials to try to get further.

An event is already set up for when your ressources drop too low and I am now starting to prepare what's gonna be necessary for the next step: Earning money! 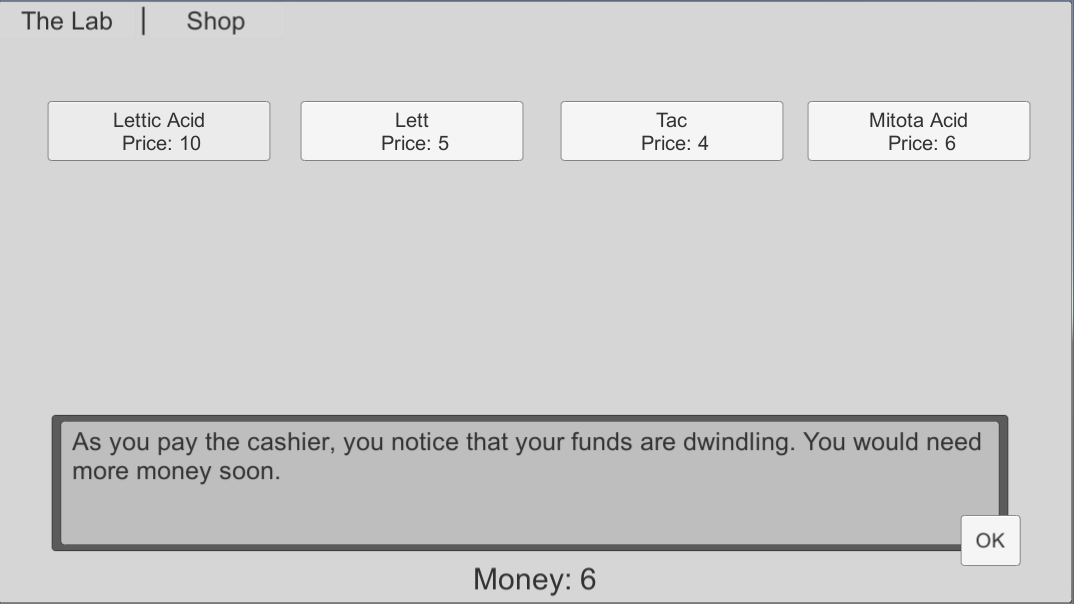 So the first day is over for me (It's 1:46 here already) and progress has been very good. Since my last post, a new menu has been in the work, a new event is implemented and more plans are in the work.

I have cut the stream off this night because of various reasons but I will be resuming the stream tomorrow. I have however been recording in the mean time to create a time lapse at the end. 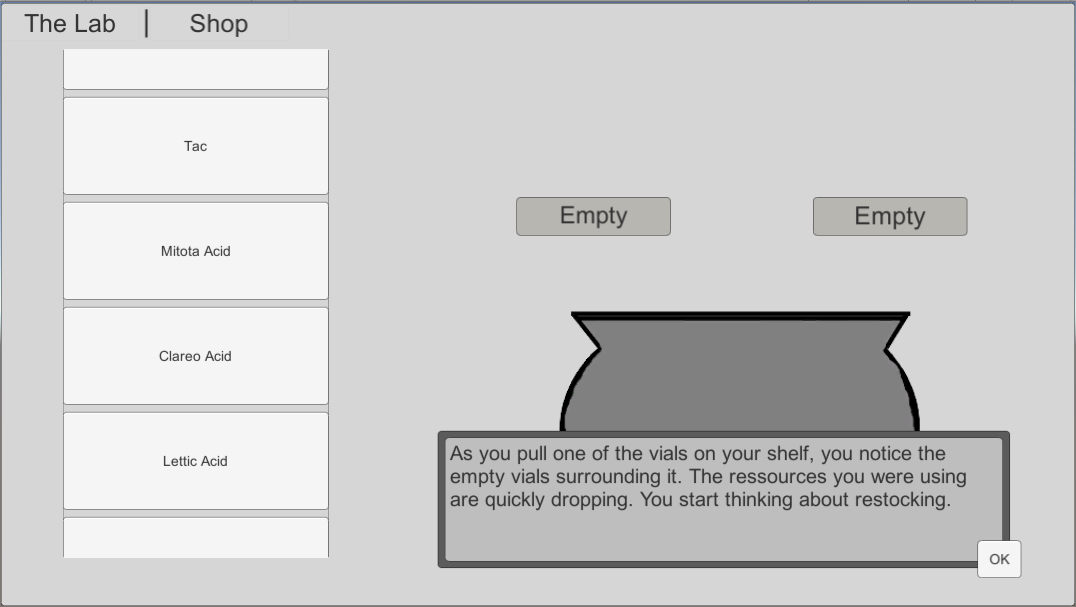 First screenshot of the game. it looks very basic for now but I am slowly building up to a functional game despite all the disturbances. 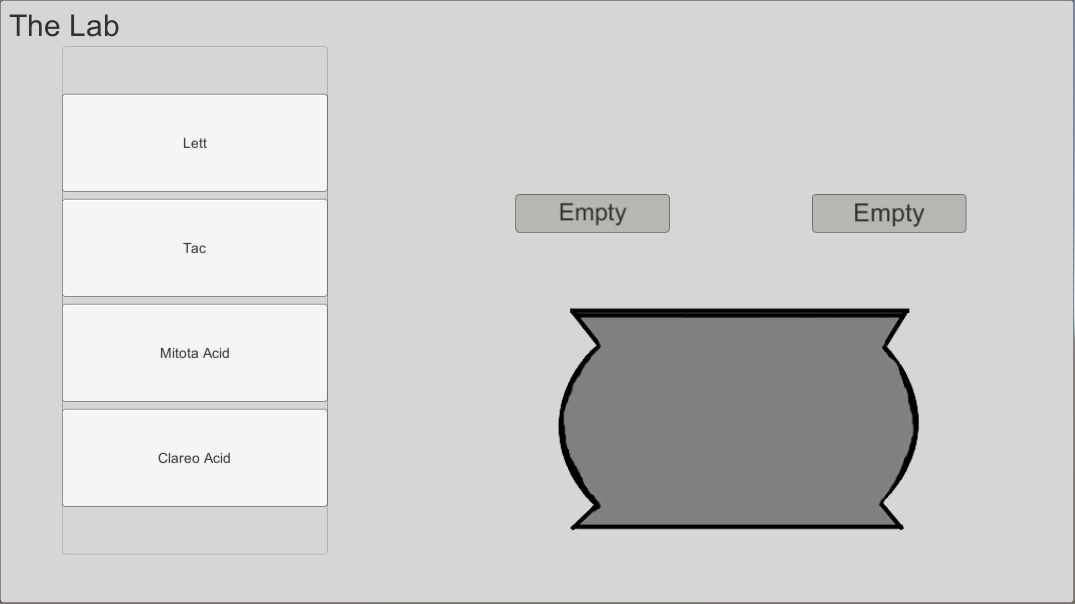 After almost 2 hours of thinking, I have locked down my concept.

I will be working on an Unfolding game, centering around the research for the Eternal Life.

As you work to reach your goal, you will need to find ways to gain money to make it further.
(Further information in the pastebin: https://pastebin.com/vazmu2H0)

As previously mentionned, I am streaming the event on my side. (Although I am currently muted)

How are you all preparing? Are all your tools already prepared?

Mines sure are not. I learned that I might have a major disturbance this week-end and my internet is coming in today so I will be setting up tonight.

I always find it interesting to see why people join jams and where they come from, background wise.

As far as background goes, I am a Game Designer at heart, with a Game Programmer training.

My past reasons for joining games jams were multiple (experience, fun, etc), but this time my reason is simple: As a team lead in the medical simulation field, I do not have a lot of time left for Game Dev. So for me, Game Jams are now a reason to drop everything for a weekend and indulge in what I like the most: Game Development.

This time around, I will be potentially joining alone as I do not have a team. However, I would not be against joining a team as one of the programmers if someone is interested.