After 12 hours I've already got this:

I spent a few hours on making sure movement felt as good as possible. I used some rather weird tricks to make wall jumping easy and easy to figure out(hold down 1 arrow key while spamming jump, you don't have to switch).

Please tell me what you think! ^-^

I added a lollipop.

This will be my 8th 48 hour game jam. I've entered every Ludum Dare since 35 and the first Alakajam.

While I think I did pretty well on the art for this game, but there were a ton of design issues that needed fixing.

This game did very well in graphics and mood, but once again the game was mostly just good looking. Although, that was what I was aiming for…

I'm hoping to make a game that is fun this time instead of a game with a good aesthetic like my previois two game jam games. I'm gonna aim for the top 10% in at least one category. ^-^

I was supposed to be practicing my skills in making music, but recently I've just been having fun with pixel art. >.>
This is something I'm working on right now:

Anyway, good luck and have fun!

I've been distracted by some other games. My attention span for making games isn't very long, so I lost interest in the project for the Kajam pretty fast. ._.

Distraction #1(making a pokemon game from the ground up): 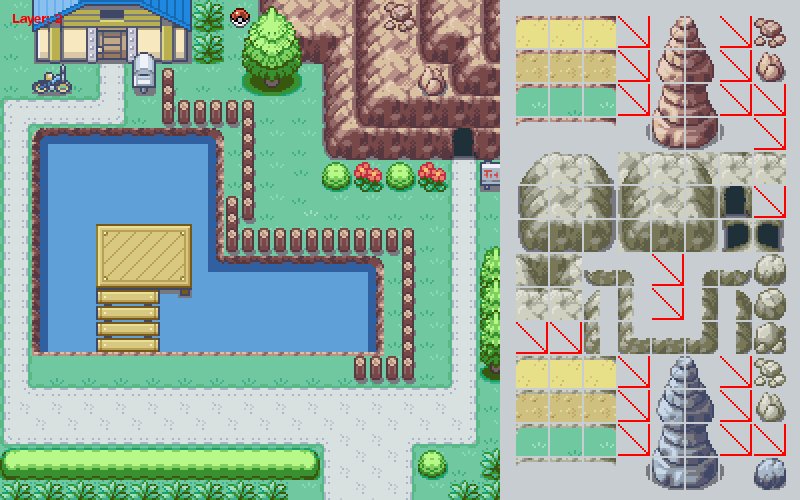 I don't think these long game jams are a good idea for me, I switch projects constantly, so it's hard for me to actually care about a single project for that long. There have only been 3 games I've made that I never lost interest in developing for more than a month, and I've been making games for 4 years. 48 hour game jams are perfect for me though! ^-^

I'm looking forward to the next Alakajam! and I'll probably see some of you during Ludum Dare #40.

This is where I stopped on the project(also in my last post):

EDIT:
Just finished the first and second levels. There will be an actual enemy in the third level though.

I just finished shaders. They look a bit ugly, but I'll change a few things to make it look better. :P
The player will be the main light source in the actual game. The spores(being shot) will also light the way. The in-level lights will be pretty rare, but I think I'll adjust their light range to be larger. 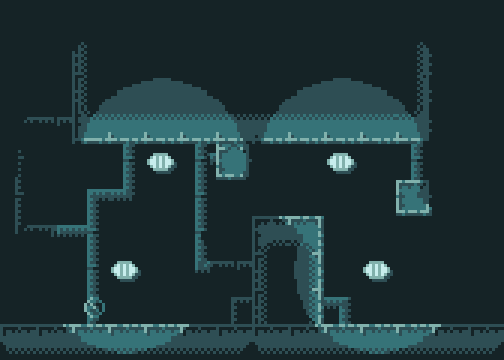 I'm working out the pixel art style for my entry right now. I have a pretty basic tileset already. ^-^

I don't want to flood the front page, so I'll just keep editing this post for now. I managed to get some free time to finish up the tileset. It looks a bit sloppy, but the level design should make it look a bit cleaner. 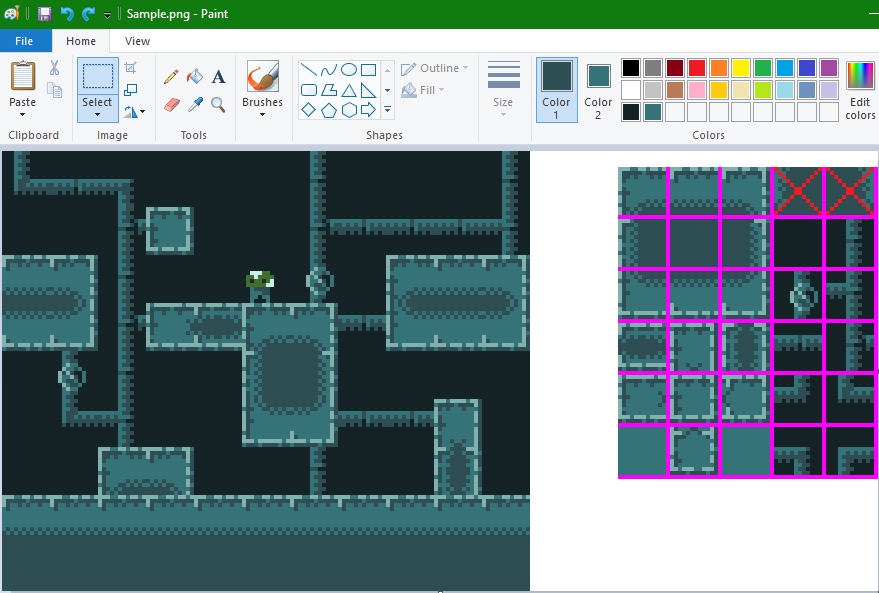 This is a rather long post(WITH PICTURES), so please click "expand." :P

Alchemic Archer is a game about shooting blobs with potion tipped arrows(but there is a portion of one of the levels where you gotta run as fast as u can).

I was very heavily inspired by Roguelight(one of Daniel Linssen's games), although my game is still very much different. 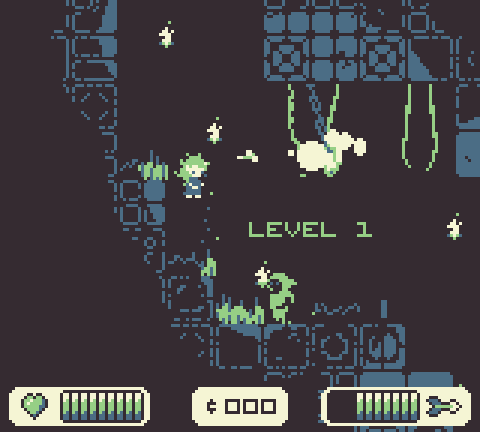 The main issue I ran into with the development of the game was that I pretty much made a game engine during the JAM since I hadn't finished my "engine" scripts earlier. I say "engine" because it isn't exactly a module with its various scripts and classes that work together. It's more like a bunch of random scripts that aren't bundled together. They pretty much do everything I need at this point. Making this "engine" soaked up about half of my time, which resulted in not enough time for making large open levels. These smaller levels that I ended up making due to lack of time ended up being the second biggest source of criticism. Although, for those players who spent some time to get used to the mechanics, the smaller level design didn't bother them as much as they were able to maneuver around the enemies while shooting. This game ended up being more like an early test for my engine since I didn't have too much time for dev.

Most of my comments are between the two extremes of: "The game is too hard since there isn't enough space to move around and it's really laggy." and the people who think the game is great.

Just a side note, the person in the first comment there was saying that the controls were "bad" because I used the Arrow Keys/ZXC layout. I got premission from @Wan later on to add the WASD/JKL layout as an option. He/she also may actually be experiencing technical difficulties unlike most people who say it's lagging. Also, it seems like(I'm not sure yet) when he/she said "physics lag" he/she was talking about how your input gets delayed if the game is running at 10FPS. I checked and he/she definitely has a way better computer than I do. I intentionally do dev on a lower end computer since that means that if it runs for me, it should run for most people. At this point, I'm pretty sure the 10FPS issue is actually on his/her end(nobody else has actually had lag like this). I'm still waiting to hear back about it though.

A lot of people ended up complaining about what they thought was lag, when it was just the camera moving at speeds less than 1 pixel a frame(which looks pretty clunky since the game is 240x160 scaled 3x). The player and everything else would move normally though, so I'm not too sure why so many people thought they were lagging. Fortunately for me, I accidentally left an option to see the current FPS if you press Q, so now people don't complain about it as much. :P

On both ends, they normally say the art was great even if they didn't like everything else. I've been working on that for 4 years, and it seems to finally be paying off. This is what art looked like year by year:

2013(I had to pull out a 10 year old computer and search for this file on it since any images of this game completely disappeared from the internet): 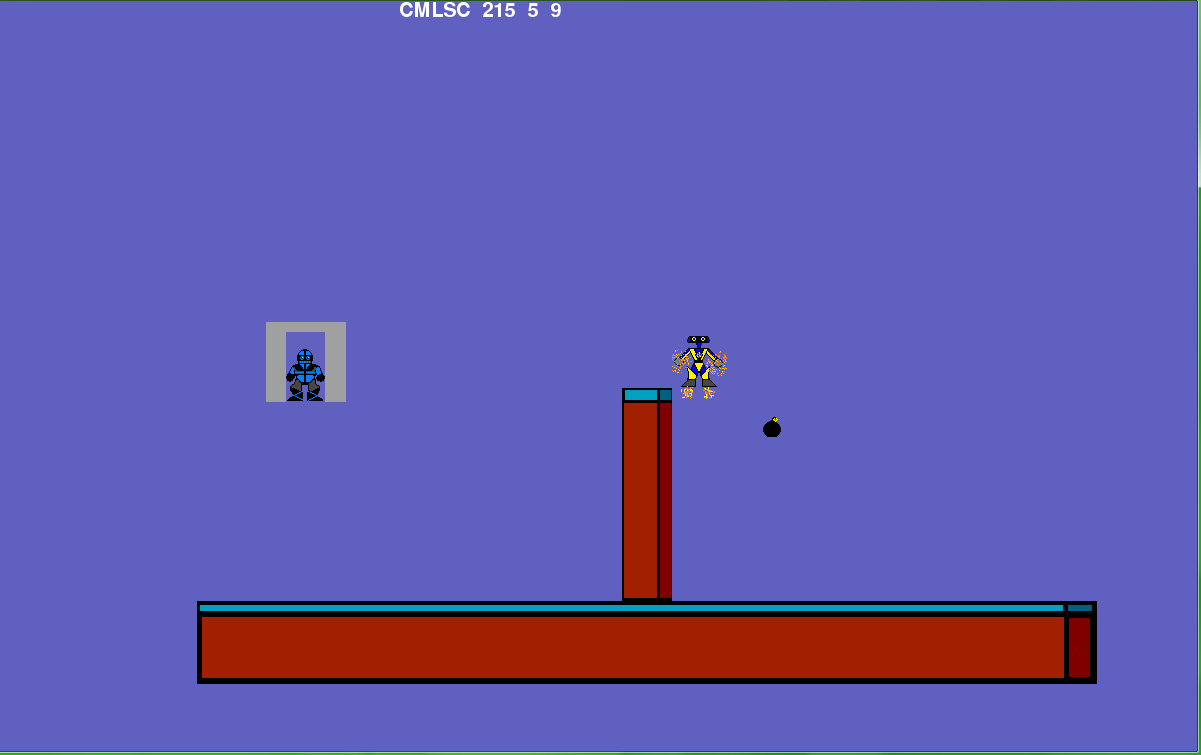 I didn't draw the characters for this, there were originally some really ugly characters(an alien and a robot). Unfortunately, I was unable to find those images.
Even though I couldn't find any images of the old characters, I managed to draw something like what I think it looked like:

Keep in mind, it was worse than that.
EDIT:
I FOUND IT IN OLD EMAILS!!! :D 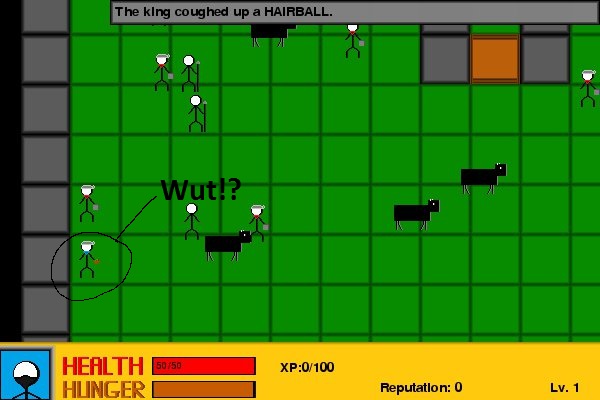 The date on this one is a bit sketchy, because the files for it date back to the very end of 2014, but i hadn't posted about it until about 2015.
The "WUT" text and the lines were added on. It was the only pic I could find. 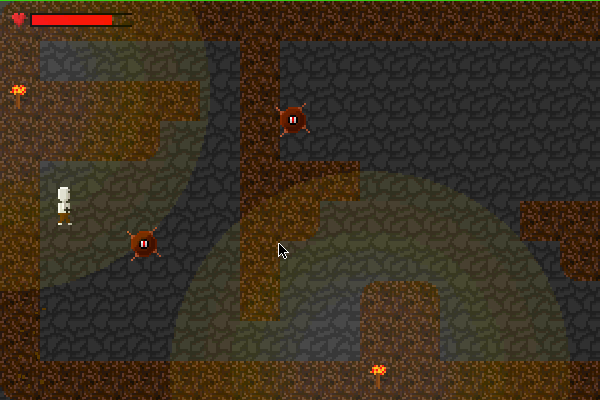 I know that it would've really encouraged me to see how someone's art got better over time like this, so I hope it helps someone else. :D

What I Did Wrong

As previously mentioned, I made the mistake of letting the camera move at speeds less than 1 pixel a frame, which made people think it was lagging when it would go at speeds of 0.1 pixels a second. The easy fix for this is to not let the camera speed go lower than 0.5 pixels a frame.

I should've set up the "engine" a bit more before the jam so I'd actually have more time for dev. That would've saved me from all the "the levels are too confined" comments.

I had designed the difficulty curve very poorly, which resulted in only the people who were willing to invest some time into the game fully enjoying it.

The music was somewhat questionable. I put 10-20 minutes toward it which was probably a mistake.

There was yet another issue related to level design that I made. The levels themselves didn't introduce potions properly(eg: putting the items on the ground and an enemy farther away so a player could figure out what the first potion does), so players didn't really know how they worked. This resulted in players attempting to just run through the level.

So the main issue here was that I didn't save enough time for level design, which is extremely important in a game like this.

This jam turned out to be more of an expirement with my "engine," so I hope to work with it in the future to make some better games. Every jam I learn a bit more about how to design games to get the players engaged and how to get them to get used to the game's mechanics even when they're complicated. Obviously, I completely failed to get the level design to train people to maneuver around enemies while shooting them. The main thing that really excited me about how this game turned out was the art. I personally think it's a pretty big step up from even my last game jam's(LD 39) art.

This is probably the right spot to put my "full playthrough" video:

I've done almost everything I planned on doing for this game. Just a bit of polishing left to do tomorrow! :D

Tell me what you think! I'm always looking for some good advice.